Apple recently confirmed that iPhones were being slowed to tackle ageing batteries.

A new official release from Apple explains the reasons for devices being slowed down. You can find the full article here. 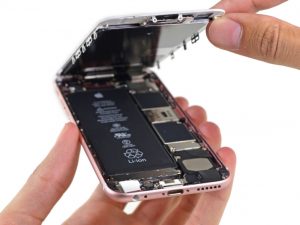 In summary, users may notice effects such as:

However there are key areas that are not impacted by this power management including:

So What is a lithium-ion battery?

Lithium-ion batteries are type of rechargeable battery found in most mobile phones and devices such as laptops, iPads and bike lights. It is the iPhone battery of choice. They are a popular choice because they are light weight, compact in size and charge quickly. On top of this they hold their charge and only lose 5 percent of charge per month. They also handle thousands of charge cycles without any memory effect(damage caused by not fully discharging). Lithium-ion batteries aren’t without their faults however. They start degrading as soon as they leave the factory and really only have a life expectancy of 2 or 3 years. That said, they do go on far longer as iPhone users will acknowledge. They don’t like extremes of temperatures though. If you’ve ever left your iPhone on a sunny window ledge and come back to find its powered itself off, then that’ll be the battery calling time out.